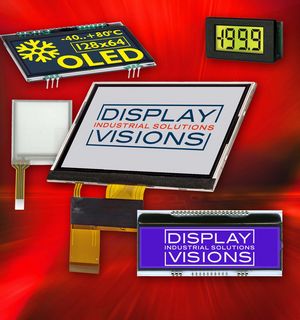 Nothing is more constant than change! After nearly 45 years, ELECTRONIC ASSEMBLY, the specialist for high-quality industrial displays, changes its name and will from now on be called DISPLAY VISIONS. The new name is designed to put even more emphasis on the company’s core competence.

By doing so, the experts for industrial displays acknowledge the fact that the main focus of their business activities has been placed on intelligent displays and HMI solutions as well as custom-built displays for more than 20 years. The product portfolio ranges from simple seven-segment displays for measuring instruments to sophisticated touch-panel colour displays. As a result, DISPLAY VISIONS serves a great number of industries from process automation, mechanical engineering and medical device technology to information technology (IOT). In terms of LCD technology, owner-managed DISPLAY VISIONS GmbH is now a market leader in Europe. Thanks to the global distribution network, the displays are used all over the world.

In keeping with the motto “making things easy”, displays ready to run right out of the box are developed in Gilching near Munich. Built-in graphics controllers featuring sophisticated graphic functions and animations enable developers to access them via simple function calls, eliminating the need for assembler programming and testing these functions. As a result, the finished product can be launched on the market considerably faster and at lower cost. Having its own development department and in-house production, DISPLAY VISIONS guarantees a high level of quality and that little bit of extra flexibility that is now more crucial to the success of its customers than ever.

More information about us.