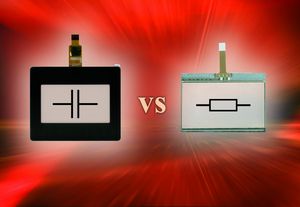 The right touch for every purpose

Which is better? Resistive or capacitive touch panels? The two input techniques not only differ in the way they work; they also have different strengths and weaknesses.

Touch-sensitive displays are an essential part of modern measurement and control equipment. Unlike mechanical switches and controllers, they make it easy to create flexible applications and interactive user guidance. Mainly resistive and capacitive touch surfaces are used. To recognise an input, they make use of different electrical effects.

Pressure creates resistance
The resistive touch panel uses the change in resistance, which is measurable when two conductive layers touch, to determine position. It essentially consists of a flexible, transparent plastic film and a rigid glass or plastic support underneath. Both elements are coated on an electrically conductive basis with indium tin oxide (ITO) on their inner sides. Very small rubber buffers, the spacers, keep them at a distance and isolate them from each other. If the flexible foil is pressed in at one point, a voltage divider is created by the contact, with the help of which the position can be determined by two measurements. First, a defined DC voltage is applied to the upper foil and the voltage at the point of contact is measured via the lower disc. This is linearly proportional to the distance of the pressure point from the edge. The voltage is then applied to the lower support and measured at the top. This clearly determines the position.
The resistive touch panel responds quickly and precisely. It can be operated reliably even with thick gloves, prostheses and any type of pen. Therefore, it is very flexible and secure in its response. However, its elastic surface is sensitive to scratches and not entirely free of wear. Inputs with multiple fingers at the same time or gesture control are only possible on it to a limited extent. The two-layer structure impairs the readability of the underlying display in direct sunlight. With a transparency of about 80%, it is slightly darker than a capacitive panel. Because it reacts to any kind of pressure, contact with other objects can also trigger unwanted actions, for example during transport.
Among other things, touch panels are the preferred choice for outdoor devices that require reliable operation under the most difficult conditions.

Sensitive field influence
The capacitive touch panel (PCAP) responds to a mere touch without the need for mechanical pressure. It consists mainly of a rigid, transparent disc to which two mutually insulated grids with conductive tracks made of transparent indium tin oxide (ITO) are attached. This creates tiny capacitors at the crossing points whose capacities are permanently measured. If alternating current is applied to this system, an electric field builds up on the surface. When a finger approaches the panel, it changes the field at that point. The abbreviation "PCAP" stands for "Projected Capacitive Touch" because the sensitive layer is located on the underside of the cover glass, i.e. the capacity of the finger is projected onto its own capacity.
The surface of a capacitive touch panel is usually made of glass and is therefore scratch-resistant. The position of several fingers can be detected simultaneously, enabling multi-touch actions and gesture control. With a transparency of 87%, it is slightly more translucent than a resistive touch panel.
However, the response behaviour of capacitive touch panels is not quite as reliable as that of resistive surfaces. Since they react to the electrical conductivity of the human body, they can at best still be operated with thin gloves or conductive special pens. Even dry skin or prostheses cause difficulties here. Displays with this type of interface are therefore not readily accessible. Water drops also impair the function to the point of inoperability. Nevertheless, almost all smartphones and tablet computers today are equipped with capacitive surfaces.

Many possible combinations
With ELECTRONIC ASSEMBLY's intelligent display series eDIP and uniTFT, you do not have to worry about the technical details. Both model series support the respective touch panel technology both on the hardware and software side. Thanks to the already integrated functions, buttons, controllers or switches can be easily defined and corresponding actions can be stored. This means that nothing stands in the way of the rapid development of prototypes and series. Especially as Electronic Assembly intensively supports its customers in their projects with advice and assistance as well as powerful development tools.