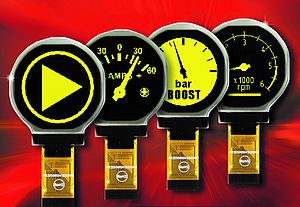 Despite the onward march of digital technology, analogue dials are still easiest to read. The new DISPLAY VISIONS EA W128128-XRxx family of OLED displays are ideal for visualizing measurement & control data. The built-in SSD1327ZB graphic controller can also place other content on the screen, for example icons and symbols.

The displays have a diameter of 37 millimeters, making them the ideal virtual round instrument gages in industrial and process automation and in all applications where easy, intuitive readability is essential. The units are designed to operate over an enormous temperature range (-40°C to +80°C). They are built to withstand severe frost, tropical heat and harsh environments. They also have a remarkably fast response time. The 128 x 128 pixels switch state in a mere 10 microseconds even at temperatures well below zero.

The EA W128128-XRxx displays offer a choice of SPI, I2C or parallel 8-bit interface for connectivity to the controller and other control electronics. An optional ZIF connector (Zero Insertion Force) is also available for gentle insertion and removal in the host device.